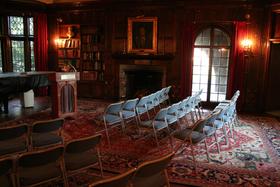 Among the old beautiful buildings that line East Avenue, you can find the Rochester Academy of Medicine – a place that has been a resource for the medical community for many years, as well as more recently a host for various community events, including “salon” piano trio concerts.

The salon at 1441 East Avenue is a room that holds about a hundred people . It would be a big living room for most homes, but it’s a rather intimate space for a concert. That is something cellist Stefan Reuss has come to appreciate over the years:

"When I was younger, I used to hate it when people were sitting very close to me. I was always worried by bow would hit someone, or their shoes would like move my music stand around. But actually, I’ve grown to like it, that close proximity. People really appreciate it. There’s something nice. People come early just to sit in the front seats, just to see how we are doing all this." 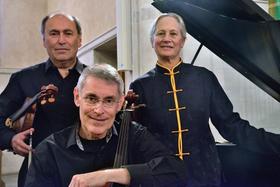 Reuss plays at the academy in a trio with pianist Rebecca Penneys and violinist Mikhail Kopelman. These concerts started twenty years ago, and the same three musicians have been together for this series for most of those years. "Personalities in a chamber group," Reuss observes, are "a very important thing, because you know when you rehearse together, you play together, especially that long - you have to get along on some level. And of course, like in every group, whether it is rock or it’s classical, tensions develop. And that’s normal, like in any relationship - marriage comes to mind."

And they’re able to support each other, without letting the others get too comfortable. Reuss describes this dynamic, "Yes there are tensions, but the nice thing is we’ve gotten along, and we’re still doing it, and that speaks for how well we’re getting along. And you know, the interesting thing is that the tensions that develop in a group, develop into great performances, because  when you perform, and there is a feeling, yeah of tension:  'oh my God, she’s playing too fast', and 'what is he doing there?' or 'I thought we were going to start this up-bow'. And you know, there are certain things that happen in the moment, and they actually translate into a wonderful performance, because it makes it feel exciting, and the audience feels they are part of something  exciting happening at that moment."

To celebrate their 20th anniversary of these salon concerts, the trio is playing the same music that was played on the first academy concert –trios by Beethoven and Mendelssohn. Reuss loves them both, while seeing the differences in their styles, "It’s interesting – Mendelssohn, definitely being one of the masters of gorgeous melodies. Right at the beginning, introduced by the cello, gorgeous melody. Beethoven –not so much.  Beethoven was not a great melody writer, but he was a great architect. He knew how to put together big pieces of music with small motives, and if you analyze a little bit,  it’s just amazing what he did. But you don’t need to know any of this, it just strikes you as great. So, you have two different types of composing there, and they are both great."

After performing on Sunday afternoon at the Rochester Academy of Medicine, the trio will also bring selections from this program the much-larger performance hall at the Hochstein School of Music and Dance, a place that also holds many memories for Reuss: 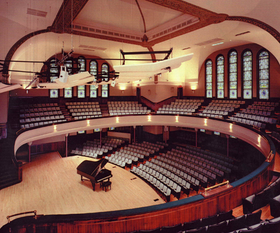 "I remember when I started here, I came here in 1988, and for many years in the beginning, the Hochstein Performance Hall it looked like it was like after the war somewhere in Europe. It was beautiful, and it sounded wonderful, but it was in terrible shape. I remember there was a big net hanging from the ceiling, because they were worried some of the ceiling would fall down and hurt people. And there was no stage yet. It used to be a church, of course – there was no stage at all.  So we would play at the lowest point in the hall, which was at the front. They took out some of the pews, and that’s where we played - orchestra, mostly at that point. And then the stage was built, and the hall was renovated beautifully.

It’s my favorite hall in Rochester, I have to say. Even though it’s rather large for chamber music, I love to play chamber music in that hall. Because there is something, despite its size - It’s 900 seats, it’s rather large – there’s still something very intimate about it.  The fact that the audience sits in the round, and you feel on the stage like you are in the middle, among the audience."

The Academy Trio will perform at the Hochstein Performance Hall as part of the concert series "Live from Hochstein" broadcast live on WXXI Classical 91.5 this Wednesday at 12:10pm. You can also find them performing four concerts each year at the Rochester Academy of Medicine.

Cellist Stefan Reuss recently stopped by WXXI's studios to discuss his experiences playing chamber music at the Rochester Academy of Medicine for twenty years, in a trio that includes pianist Rebecca Penneys and violinist Mikhail Kopelman. We also discussed the trio's upcoming performance this week on Live from Hochstein.