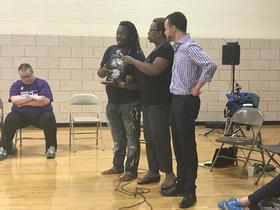 The Rochester Fringe Festival is two weeks away and already one show is sparking serious conversation. Lee Wright leads the First Inversion choir and they have a show in the festival dedicated to African American spirituals. But recently, some in the community called out Wright for what they say are anti-black images.

“You can name any culture: the Asian culture with the things they keep sacred and the Native American culture with the things they keep sacred. What is it that we have as black people that is sacred?“ said Christopher Coles, a community activist who first sparked the discussion last week with a post to his Facebook account. Coles says he’s bothered by the imagery and the use of a mostly-white choir to sing the songs.

Spirituals are songs that have their origin in slavery. People in bondage often sang them to either communicate messages, find freedom or simply deal with the intense and often deadly hardships of slavery.

“Now, I chose that image because to me it said serious,” said Wright explaining the image of the hands in chains. “They were modern black hands in chains and I thought that was also very important. We’re not just singing about history, we’re singing about the African American experience then and now.”

Activist Adrian Elim agrees but used the modern look as a reason why white people shouldn’t sing the music, saying: “The conditions of which our ancestors went through and why those songs were created is a similar circumstances to things like why ballroom were created and hip-hop created. These are things that aren’t going anywhere. There are people who sit in prisons right now. White people aren’t out here doing that. White people aren’t the ones filling up the prisons but you’re the ones who call the police on us.’

Wright says he’s re-opened auditions and hasn’t heard from anyone but says he will change the images to promote the show. He and Coles also agreed that if Coles can help get more black singers and people in the audience, he will prioritize them in the seating. Wright says he’ll also cover the costs of the show, and some members of his choir say they will offer financial help as well.