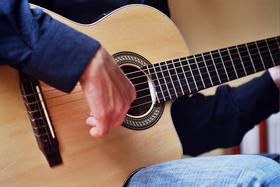 Throughout this afternoon and evening, music will be filling the streets around Rochester.

The first annual Make Music Rochester event is modeled after a Parisian tradition that began in 1982 as a tribute to the Summer Solstice.

Maria Furgiuele, interim executive director at the Community Design Center, is one of the organizers of the one day celebration. She recalls being in France 30 years ago and experiencing the original event that inspired it.

"I happened to stumble upon it as a young person backpacking through Europe in 1987. I wandered onto the streets of Paris following the sounds of music throughout the city. I thought it was an amazing experience. (More recently) a friend and I were brainstorming about things we could do to bring people together in Rochester and celebrate the things we have in common and of course, music, food, and art are always those kinds of universal things that really work to bring people together."

At least 30 different groups will be staging musical performances at various locations around the city and beyond today, and they don't have to be professionals.

One of the events happens tonight at 6:30 at the Christ Church garden on East Avenue. That's where Julie Schnepf, owner of Burnunzio's Uptown Music, will be leading a group of ukulele performers in a few songs.

"We're going to give a short introductory lesson and then we're going to use a very simple song packet to play songs in the garden," Schnepf said. "I'm hoping to have as many ukulele players there as I can recruit."

At Record Archive, a harmonica class is scheduled from 1 p.m. to 3 p.m. Co-owner Dick Storms will lead players in songs ranging from Folk to Bluegrass and Country.

Accidentally hearing music can melt your heart and ignite your curiosity.  That’s a real possibility on June 21, a day of worldwide celebration of music on which all kinds of musicians – young and old, amateur and professional -- will stream into parks and streets and bridges to make music for the sheer pleasure of it.  Keep your ears peeled.