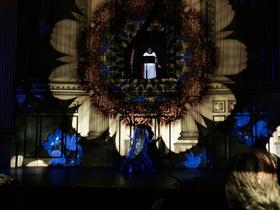 These KeyBank Rochester Fringe Festival shows are like chasing lightning bugs across a hillside. For most of the shows, you get one, two, maybe three looks at them. And that’s it. They’re gone.

Oh, and a fourth collaborator: The Lyric Theatre itself.

Built in 1915 as a church, the majestic venue on East Avenue has not yet met its potential as promised after it was purchased by Rochester Lyric Opera in 2015. But it remains an architecturally impressive building, and seems to work well with the unamplified voice, which is what it was designed for in the first place. When George Eastman walked into the main room shortly after its completion, he pointed up at the ceiling and said, “I want one of those.” Something like that. And indeed, Kodak Hall at Eastman Theatre has the same ceiling.

Aria’s opening moment was actually a pre-opening. As guests filed into the vast room, 14 dancers were already lined up along the walls and the front pews. They stood frozen, like statues. Some held curious, organic-looking ornaments, like curios gathered from the woods. Their movements were subtle, in a mechanical, animatronic, clockwork way. One of the figures in red costumes at the front would shift positions, then out of the corner of your eye you’d spot one of the figures in white costumes along the walls rotating in another direction.

As the quartet fivebyfive eased into Julia Seeholzer’s “Constant,” these dancers slowly moved to the stage, depositing their ornaments along its edge. It was all very Druidic. Pfohl Smith assembled similar mysteriously ambitious shows for the last two Rochester Fringes, Anomaly and Labyrinth, both at the Strasenburgh Planetarium.

From “Constant,” Aria blossomed into a spectacular vision: Harris’ image of a giant, yellow-petaled flower projected onto the wall behind the stage. And at the center of flower, emerging from a second-floor doorway, was Piper Brown, singing “The World Within Me Is Too Small,” from the 2012 Missy Mazzoli opera Song From the Uproar. The Rochester-based fivebyfive – Laura Lentz on flute, Marcy Bacon on clarinet, electric guitarist Sungmin Shin, bassist Eric J. Polenik and pianist Haeyeun Jeun – was actually built in 2015 specifically to play Mazzoli’s compositions.

Two songs into Aria, two songs from young women composers. Then “Parlour Games,” by the multi-disciplinary composer Meredith Monk. And another Mazzoli piece, “Magic With Everyday Objects” before Aria finally got to an old white guy: “Elegy,” a 150-year-old piece by the French Romantic composer Jules Massenet. 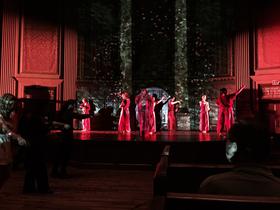 Piper Brown dominated the fast-moving 60 minutes of Aria. Ruggero Leoncavallo’s Pagliacci and Florence Price’s “Songs to the Dark Virgin,” built from the poetry of Langston Hughes, were carried by Piper Brown’s astounding voice to that ceiling lusted after by George Eastman. This has not escaped the classical world. The 39-year-old soprano is a Virginia native now living here after her husband took a job in Rochester a few years ago, but she spends a lot of time in airports, working for outfits such as San Francisco Opera.

Harris’ projections meant the room was often dark, dusky even, with images striking the dancers and leaving their shadows to scamper along the walls. Images of falling leaves, a tumbling stream and then a waterfall cascading down the two towering columns behind the stage, as Biodance dancers elegantly swooped around in themes of red. A shimmering sheet of red fabric connecting dancers in ways that were elegant and seductive, or even amusing. As when Pfohl Smith and Zachary Frazee danced to a recorded piece from The Barber of Seville, smacking the floor – twack! – as the word Twack! was projected behind them, before a shower of scarves erupted from the wall.

Is Twack a word? We’re checking.)]

Check rochesterfringe.com for a complete schedule and tickets. A few selections coming up Tuesday:

Fringe Gardens, 7 p.m., The Avyarium. The 1975 documentary Grey Gardens, about a reclusive mother and daughter living in a decrepit mansion in East Hampton, New York, has inspired many, many versions of the story, including an award-winning 2006 Broadway musical and a 2009 HBO film starring Jessica Lange and Drew Barrymore. This tale of hoarding and cat women adds improv, audience participation and a bit of a Rochester take by the local comedy duo, A Happy Accident, Sara Moore and Joanne Brokaw.

Obligatory Villagers Present: The Big One, 7 p.m., MuCCC. More improv and audience participation, plus music, in a contemporary cabaret driven by today’s insanity. Without having seen it, the guess here is the show will spend a lot of time at 1600 Pennsylvania Ave.

Unleashed! Improv Presents: Secrets, 8 p.m., Blackfriars Theatre. There appears to be a theme to Tuesday’s Rochester Fringe. More improv and audience participation, albeit secretly: Audience members are asked to share their dark and weird secrets, to be acted out onstage by the Rochester improv entourage.

Jeff Spevak, a cultural arts contributor to WXXI and Rochester-based writer, is reporting on the Fringe Festival daily at wxxinews.org. His web site is jeffspevak.com.